Annotations on the photographs were made by Filippo Colaricci,  along with the note that "From Nicolangelo, cam FIlippo, Andrea and Biaggio that built the 12 room house that was divided as I have shown on the picture".

This would have been the farm with the extensive olive trees,  fondly remembered by Concetta Patullo.

Carmine Patullo remembers that during WWII, for a short time during which Bojano was being bombarded by American planes,  the family relocated to the farmhouse for protection from the bombardment.  This lasted until the Germans moved out of Bojano, and relocated their guns north of Monteverde ( and hence,  close to the farm ).

A description of how this ( and other ) property was originally acquired by the Colaricci family is contained in an account written by F. Colaricci: The Colaricci Family and Their Situation
The following are photographs of the Monteverde farmhouse :

Colaricci Monteverde farmhouse 3
The next image is a marked up photograph of the farmhouse in Monteverde, showing how ownership was partitioned among the sons. 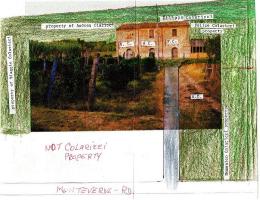 Photograph, marked up showing ownership
Lastly, images to locate the farmhouse with respect to Boiano. 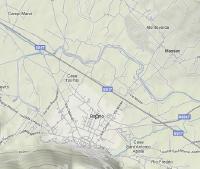